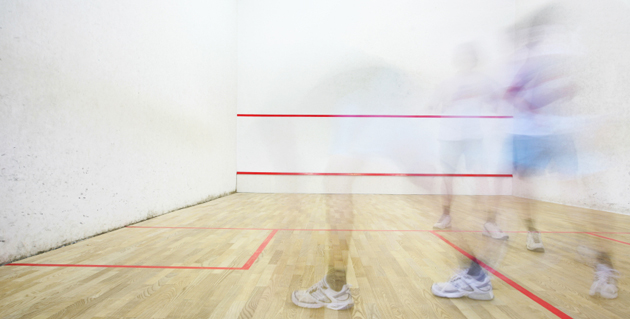 It’s ironic that the the first time I can ever recall taking a day off because of sickness, in a working-life that spans more years than I can remember, is a result of an attempt to improve my fitness so that I could better get through the amount of work in each day!

5pm, Wednesday 27th April 2011—Mark O’Donnell and I walked onto one of the squash courts at Sydney University to knock a ball around, in the hope of getting me a bit fitter. We had been doing this for the last 8 or 10 weeks and I was pleased that I had (a) survived and (b) shown that I had not lost all the skills of thirty years ago – when I played competition squash on the very same courts at Sydney Uni.

I was enjoying these sparring sessions and they were, in fact, starting to have some effect – I was feeling much more energetic and relaxed during the day. I had done the right thing – I let my GP know my plans and took his advice to not over-extend too much at first – but my competitiveness probably made me push myself a bit more than I should have done. I was actually at the point of looking forward to Wednesday afternoons…

However, this turned out to be a very different afternoon.

Some 15 minutes into our “game”, lunging towards the front wall in an effort to reach a ball, I slipped and fell face down on the floor. The next few seconds were a blur, for both Mark and myself…

I slid towards the front wall, at what was later described as an incredible rate. My arms buckled and the distal ends of each radius on each arm were fractured, near the wrists. I ploughed head-first into the wall and my face was crushed against the “tin” as my forehead was flipped back. The result was like a whiplash, and four of my neck and thoracic vertebrae were fractured.

I passed out for several seconds, but quickly came to, and I remember the warm, flooding feeling of blood gushing from my nose and face. My greatest concern at this stage was to get back on my feet and continue the game! Mark was instantly by my side, holding me firmly still and within minutes staff were helping him, insisting that I not move – at the time I could not understand their concern – I had to get back on the court! Now, in hindsight, it is all too obvious why they were so concerned. An ambulance was called and within 15 minutes I was at Royal Prince Alfred Hospital Emergency.

From the moment I arrived in Emergency until the following Wednesday, I have virtually no first-hand recollection of events. I remember some confrontational episodes with the nursing staff, during which I insisted that they let me go, but the rest is clouded by pain-killers, hallucinations, nightmares – all of which seemed crystal clear – very real but, in retrospect, quite impossible.

The decision was made to let my condition stabilise before the first operation. Other than imobilising my wrists with back-slats, no surgical action was taken. I was told afterwards that these first few days were “touch and go”. On Monday 2nd May, in the afternoon, I underwent surgery to rebuild my face.

In order for this to happen, the surgeons had to do an elective tracheotomy, as all the airways passages behind my nose and upper face were crushed, and there was no other way to administer anaesthesia, let alone for me to continue breathing. During a marathon operation of more than just a few hours, my facial tissue was pulled forward, the underlying broken bones and tissues were removed, plates were inserted where needed, several sinuses were “obliterated” (that’s what the surgery report called the process) and then to cap it off, a craniotomy was performed, to allow access to the upper sinuses in my forehead, before my skin was stretched back over my skull and the whole held back in place with a massive row of staples, from ear to ear – to say nothing of the dozens of micro-sutures that the plastic surgeons sewed below my eyes and at the edges of my face.

The plastic surgeons compared the extent of damage to my face with what might be expected after a motor vehicle accident at 40km/hr. We are all certain that I was not travelling at 40km/hr on the squash court, and to this day no-one can explain why so much damage occurred. Later, osteoporosis was considered as a possible explanation, but subsequent bone-density tests indicated that my bones (although getting old) were no more or less brittle than to be expected at my age.

Recovery after that first operation was patchy. Although I was moved to the general ward, small complications such as heart arhythmia and DVT, quickly saw me back into Intensive Care and I stayed there for several more weeks.

On Monday 9th May, a week after the plastic surgery to rebuild my face, neurosurgeons tackled my fractured vertebrae. The tracheotomy tube was obviously still in place and the preferred anterior approach to reach vertebrae C1 and C2 was in doubt. Nonetheless, they succeeded with this operation, screwed together these vertebrae, and straightened my spinal cord displacement thereby minimising the risk of pinched spinal nerves. A hard neck-brace and collar was applied – and I was told that I would need to wear the collar for at least 3 months. 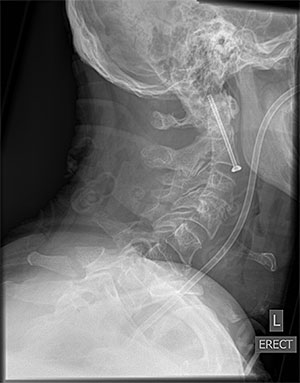 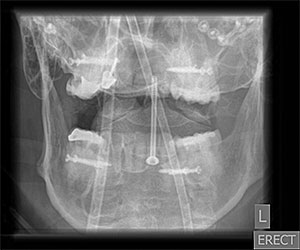 Both these x-ray images show clearly the long screw securing C1 and C2 in my neck.

The dozen or so smaller screws used to (temporarily) immobilise my jaw are visible in the image on the right.

From that point forward it was a matter of letting my body heal itself. The days and nights seemed to drag on and on – it seemed like the only differences were the faces of the nurses that administered the pain-killers. Plaster casts were put on both my arms, to replace the temporary back-slats that had been applied in the first 24 hours.

I was fed a fluid not unlike iced-coffee, by a naso-gastric tube; I had two IV connections and a PICC line (inserted into a vein, a tube was advanced to within millimetres of my heart), for various drugs; and a catheter for going to the toilet. There was an endless succession of X-rays, ultrasounds, CT scans, BMI tests, and more X-rays.

Throughout this recovery period, we had to contend with the tracheotomy – swallowing was out of the question, breathing was difficult and I was fed oxygen most of the time through nasal catheters. I could not speak, and most communication with the nurses, family and friends was by way of scribble pads (writing was hampered, of course by having plaster casts on both arms), deep grunts or sign language.

As the healing process progressed, different variations of my “trachy tube” were introduced, with different resistances to airflow and eventually a version with a “speaking” tube was inserted. For the first time in perhaps two weeks I was able to utter some sounds that resembled human speech.

From this point, my recovery began in earnest – even if it seemed very slow. Daily “walks” around the ward revealed how much muscle tone had been lost and it was a great effort at first to even stand up.

Over the span of perhaps a week, the various tubes and attachments that were supporting me were removed, as I gradually recovered the ability to feed myself (if only puréed foods) and go to the toilet. Some four-and-a-half weeks after being admitted to hospital, I was moved to a general ward, with no further life support required other than my now very familiar “Miami-J” neck brace.

In the general ward, a daily routine began. This started with a morning shower, then breakfast (puréed things), followed by morning rounds from the various surgeons and my daily blood-letting. I remember thinking how strange it was that the various specialists had effectively sub-divided my body into different systems and different teams of doctors were treating each system – “plastics”, “neuro”, “hands”, “speech & OT”, “cardio”… Then came morning tea and the morning batch of visitors. And perhaps a brisk walk around the ward as exercise. Then came lunch (more puréed things). And an afternoon rest (if I was lucky) before visitors were allowed in again. Then dinner (yes, even more puréed things). Then the dressings on my throat and the pads on my collar were changed before perhaps watching some TV and falling asleep.

Interspersed into this daily routine were visits to other departments for X-rays, bone-density tests, and the like. But the boredom set in early and the frustration of how slowly my recovery was progressing lead to short bouts of depression, which I am sure my many visitors perceived.

There were, nonetheless, milestones. I remember the simplistic joys of taking my first sip and swallow of cold water; of moving on from puréed things to semi-solid foods; of washing my hair for the first time in 6 weeks.

I stayed in the general ward for the best part of two weeks. I remember noting how many of my fellow patients came and went – and how I out-stayed them all! Until it became obvious that I was ready to move on.

The doctors and OTs particularly were concerned that my family home was a four-storey building and that movement up and down stairs could be an issue. There was, initially, talk of transferring me to a Rehab unit before letting me go home. But, for whatever reasons, I was discharged on 10th June and allowed to move back into my own house – with only slight concessions to my condition… we installed a temporary bedroom for me on the ground floor, with access to a bathroom and toilet, and only a small climb to the kitchen and main entrance.

And so has begun what should be the penultimate stages of my recovery. I am writing these notes now, on my own computer, in my own study, in my own home. I say “penultimate” stage, as I am told that it may be years before the signs of the accident are no longer evident, if at all.

This current stage will involve exercise, physiotherapy and patience – lots of patience. I will be wearing my old friend the “Miami-J” neck collar for at least another two months and perhaps a soft collar after that. I suspect I will not be going back to work for a few more months after that, although I am now getting involved again in daily events, relying on phone and email, but only in a small way.

I have yet to conclude how much involvement in the operation of Colours I will be able to maintain. I enjoy the mental stimulation, and I very much enjoy the nature of the work. However, the incidents of the last few months have made me realise that there are many, many other things that are as important or more important in my life.

I realise that I have been exceedingly lucky to have survived the accident. Why have I been given this “second chance”? Perhaps the last few months have been a special “time-out” to allow me to review things and decide just what is important and what is not?