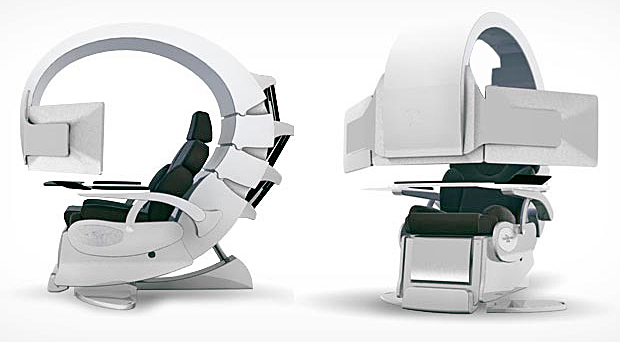 In a recent post, I drooled over Wacom’s latest multi-touch graphics tablet. Now I have found a workstation worthy to house the tablet. The Emperor 200, from MWE Lab, boasts luxury, sophistication and ergonomic comfort without compromise.

The Emperor 200, from MWE Lab, boasts luxury, sophistication and ergonomic comfort without compromise.

The Emperor 200 is hand built to the user’s requirements. It is the ultimate computer workstation with several exclusive features such as touch screen control center, air filtering system, light therapy, electric powered leather seat, up to 3 x 27″ LED screens and a breathtaking sound through a Bose® Companion 5 audio system!

The armrests are genuine Italian leather. The seat is a Recaro Style Top Line XL, with “climate package”, made of Italian leather, with lumbar support. The whole thing is controlled via a 10″ touch-screen, with electric actuators for adjusting the seat height and tilt, the armrests, monitor position, climate control, lighting…

Out of the box, it comes with everything. A fully spec’d up Mac or PC is thrown in as well. Only one optional accessory is available, for those who have the room – a 360° programmable rotating podium. Mind you, I am not sure I could imagine anything else that I might need at my workstation. Except perhaps a coffee percolator. Oh, and a phone. And maybe a Swedish masseuse. And a food replicator. And, of course, my Wacom touchpad.

The Emperor 200 is so new that the manufacturers have not yet released a promotional video – although I am sure it is not far off. The videos below feature its baby brother, the Emperor 1510 (which sells for only $6,000!) – even though one of the clips is labelled (incorrectly) as the Emperor 200.